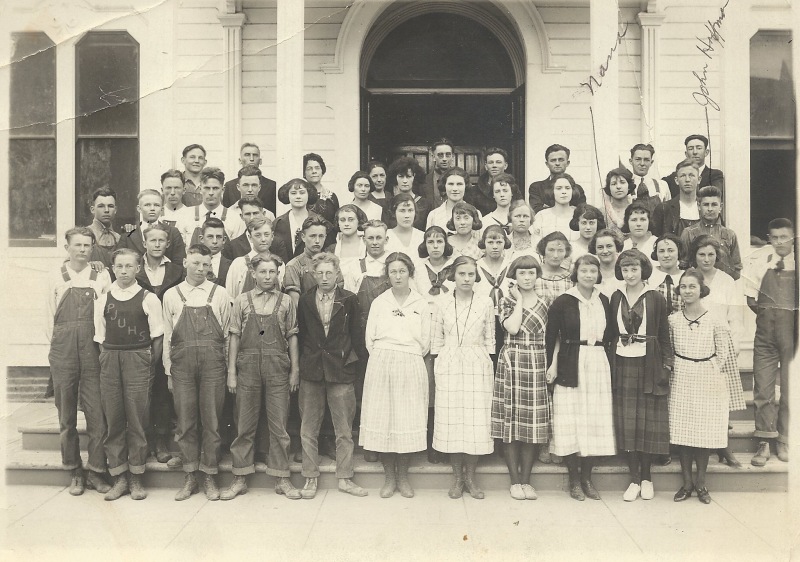 This is a photo of students from Pierce Joint Union High School in Arbuckle, California. I believe this would have been taken around 1920. My grandmother, Marjorie Cain Hoffman Meckfessel (William John Clarke’s granddaughter) and her husband-to-be, my grandfather, John Hoffman, are pictured here (labeled–right on the photo–by some unknown relative). I love examining the clothes, shoes, and hairstyles in this photo. When I see this picture with so many of the boys wearing overalls, it reminds me of my own high school days in the ’70’s when I would show up at my grandmother’s house wearing my bib overalls–very much in style at the time–and she would shake her head with an expression that conveyed slight dismay and a lot of amusement, and say, “You look like you just got off the tractor.” I don’t think she ever understood why a young woman would choose overalls as a fashion, but she was always happy to see me, farm-yard apparel or no.

It’s difficult to know where to jump in to the family history, but as I intend to focus—at least initially—on the family of my maternal grandmother (Marjorie Cain Hoffman Meckfessel aka Nana Marge, 1904-1998), William John Clarke (1820-1894) seems a likely choice.

William John Clarke was my grandmother’s step-grandfather. He’s an ancestor I’ve been aware of for many years thanks to the fact that he kept a diary while journeying west by wagon train in 1849, and that the notebook somehow survived. The small, leather-bound journal was discovered in 1931 by a man who had purchased a ranch in Colusa County that had been owned by Maggie and Warfield Powers, Maggie (Margaret Jane Clarke, 1869-1930) being one of WJ Clarke’s daughters. When this man came across the journal in an old trunk, rotting in a barn on the property, he was kind enough to pass it on to a friend of the Clarke family. It was eventually given to my grandmother.

In the 1980’s the journal was borrowed by some of my mother’s cousins who were interested in family history. They copied it, typed it up, had it bound, and handed out copies to the family. I admit that after giving it a quick look and finding much of it rather dry reading, I let it sit on my bookshelf for many years before I read through the entire diary. When I finally sat down and read it, I found it fascinating, especially since it did not end with his arrival in California at the gold diggings, but had information about his activities after he arrived. I’ll be sharing a lot of information on his various adventures and undertakings, but meanwhile I’ll just say that he is a key ancestor who was attracted to the land in Yolo and Colusa Counties and was one of the early farmers in that area.

I have to stop and give a shout out to the industrious and talented women who in addition to making the journal available to us, also conducted extensive research on WJ Clarke, for which I’m very grateful, and they did it when family history sleuthing required much in the way of letter-writing and wearing down of shoe-leather, before the internet! I’m going to credit them right now as I certainly stand on their shoulders: Joyce Dawley and Marilyn Kelly Ornbaun, who are both great-granddaughters of Clarke.

Our ancestors’ stories are all the more fascinating when placed in the context of historical events. I find Clarke to be an interesting character as his personal history was influenced by events that occurred “across the pond” in Ireland and Scotland, while as an early comer to California he actively participated in the making of history including the gold rush, the building of the City of Sacramento, and influencing farming methods in the Central Valley. His story is anything but dull, from his early migrations, to the mysterious circumstances of his marriage to Catherine Foster Tenney (1842-1897), whose first daughter by a previous marriage, Elizabeth Tenney Clarke (1863-1933), was my grandmother’s mother—and whatever became of that first husband, anyway? Elizabeth, or Lizzie as she was called, laments the fact that she never knew what became of her real father in a letter she wrote to a cousin after her mother died in 1897. This letter also reveals some startling information about one of her siblings, Willie Clarke, information her mother had kept from her.

I decided to start this blog because I love to write, and I have recently been completely geeking out over researching my family history. Why not combine the two? Family members have been asking me about my research and this will be a great way to keep them informed. I plan to write about my ancestors as well as my experiences–successes and roadblocks–as a newbie genealogist.

My name is Holly Holbrook. I was named after my paternal grandfather, Hollis Holbrook. The story is told that upon hearing what my name was to be one of my aunts declared I should be called Hollyberry, and the nickname stuck within the family. It especially evokes warm memories of my maternal grandmother, Nana Marge (Marjorie Meckfessel), who always called me Hollyberry.

So, welcome family, friends, and other family history nuts, to the hollyberryblog. I look forward to reading your comments and sharing information.

Broadcasting from the Bernal Heights neighborhood of San Francisco, I'm publicly geeking out on my family history--bound as it is to the past 170 years (or so) of California history, and to points east before that. My ancestors came to California for the gold rush but stayed for the land. I've been uncovering many of their stories, and hope to make them as interesting to you as they are to me.